White Diamond, or DIAMOND is installation art, it belongs to a category of new media techniques that I am producing for several years. There are several elements of the artwork, like: digital prints, computer animation and lightning effects, which compose an ambiance or installation art.

Variations of this work were exhibited at the following places:

The supremacy of media attention and informatics intrusion of our time often suspends the results of salvation. In unbelievable synergy of visible or indirect signs, signalization and outlining materialization of experience, the revelations we encounter in some fine arts performances sometimes offer far more and safer resorts. It is not a surprise that preciseness used during her painting, as outstanding reductive plans and fields of fine arts work, Aleksandra S.V. managed to express in analytical and nothing less sensual preciseness turn to new range. Her earlier fine arts processes – playful coloring, reliance on likable heroes of media culture, proved to be consistently led phases where the consciousness and sense for the enigma of the order spreads in coherent sample grabbing from the rate of given existence.

Moving toward imaginary virtual groups of signs, as well as fine arts sensations that she managed to make her own structures of visual sensation, in period after 2001, was overtaken by unique searching for different stronghold. Author’s persistence to get into transposition of fine arts performance is somewhat surprising. It followed path from realized picture as conceived and composed area or picture as three-dimensional object emphasized in further, by all means visual searches for technological strongholds in virtual world of animation, as well as physical location for an interaction titled ˝Only the Ball˝ uniting real basketballs and computer animation projection as a transformation toward hidden cosmogonies order of celestial bodies or conforming with features of micro-world.”

“An ambient integrity conceived and titles ˝The Diamond˝ transfers, only at first sight, monochrome that was portrayed by the painter in her cycle ˝E75˝. Search for the perfect geological sample, for a crystallization of a mineral radiating foreground of the origin and material energy wherefrom it is noticed, notes and basically establishes that our motion doesn’t have to be just a fewer on some locality. In an ambient U exhibition plan ˝The Diamond˝ outgrows to performed and animated, but also light modifiable sensation of the radiance and light splitting. Secret of discovering carbonic finding with a center in roughness puts in the first plan a twist of human economic hunger by emitting ultra-strong hidden core, as it is the case within geological layers.

A diamond, in globally dazzling jewelry utilization emits the quality of synthesis. At the same time in given encyclopedia terms this choice, same as artistic attention compared by Aleksandra S.V. brings together artistically presented examples to contemporary, toward the category of unique artistic archaeology, the best hidden secret, and at the same time, core of carbonic chemical allotrope. And if the origin from Greek word ˝adamas˝ standing for inviolable or metaphorically speaking ˝irrefutable˝ group of material finding, than the idea is to be perceived as a provocation of essentially changeable reduction or obsoleteness of human powers. By introducing into ambient fine arts realization of controlled light and shine, ˝The Diamond˝ settle in the domain in which artistic destination, poetic power and stronghold are located in incoming, even journey of mysteries. 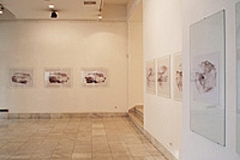 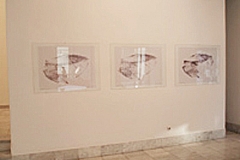 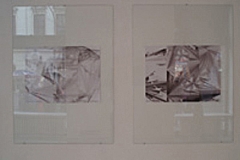 More about the Exhibition

It should not be forgotten that various and semantic and relieving sets out and journeys significant for human experience are actually geologically oriented. In prime of scientific, technical, but also artistic innovations in the early XX century, the Russian poet Mandeljštam, unlike today’s medial, during his years of what proved to be destructive ideological campaigns for ostensible improvement of the world, turned in his dockets to The Conversations about Dante, Florence creator of picturesque descriptions of The Divine Comedy. Through tripartite experience of human spirituality of Dante, Mandeljštam seemed to try to puzzle the energy of traveling into the center of the Earth, from the fire of the punished and cursed to bright rhythmic alternation of the Sun and the stars. Such resort of geological, botanical and theological characteristic of then repressive period, might express parallels in current solution of performances and thematic assimilation of fine arts in today’s cultural currencies. Between billboard culture, intrusively, yet methodically realized dropping of the system of our environment and law of advertising, in her choice of diamond, unchanged and hidden within a ground piece, the author entails different realization and literally radiating presentation. Between the illusion of creating in ambient of a gallery and a reflection of this amazing planetary inheritance, as virtual and slipping motive, the art is approaching universal uniqueness of its strength.”

…There is more about the digital prints, an element of this artwork.

My Inspiration for Diamond

It is not unusual for me to spend most of the time in a meditative state. And this peaceful and blissful state was a birthplace for the idea of pure light doing nothing but existing. My equivalent for this eternal bliss was an elegant brilliant rotating white diamond.