I used figure drawing more frequently in earlier stages of my art work. I used to create a large number of croquis and studies of a live model when I was an art student.

There is a lot of information already available about the techniques of drawing or painting a study of a human body.

It is necessary to include various measurement techniques to determine proportions. Also, there are some fundamental lessons in Leonardo da Vinci’s famous renaissance manuscript “Trattato della pittura” about the proportions of the human body. The proportion which is a characteristic of still standing figure, changes if the figure changes the position, sitting etc.

It is also explained in the tractate that there is a principle of the perspective which has to be implemented while drawing or painting a figure. The objects, or parts of the human body in this case, which are in light or in shadow and are closer to our eyes, appear to have stronger contrast between the light and the shadow parts. As the distance between the live model and the artist increases, the factor of the density of the air steps on the scene. The contrast begins to fade more and more, and the most distant parts appear somewhat blurred. This effect was Leonardo’s favorite, and he named it “sfumato”.

Not only light and shadow phenomenon in figure drawing transforms its appearance because of the distance/air density factor, but also lines and colors, says Leonardo. The thickness is also altered, and the contrast between thin and thick lines also decreases, as the distance increases. Also distant parts alter the color, and the colors become colder: red becomes purple, then violet; yellow turns to green, then blue; white and black becomes grey.

Obviously, it seems that the whole picture, or scene, fades and gets blurred as the distance increases in front of our eyes.

An invisible aspect of figure drawing

In art, and of course in visual arts, everything is of highest importance always. I want to indicate that everything is equally interesting and astonishing.

And surely, a human body is also an object of absolute admiration as a creation.

The only possible concept to comprehend and appreciate the significance of human body in fine arts is to be aware of its totality. This includes the invisible aspect which interacts with both inner and outside world and realm of the human as a concept.

When drawing or painting a human figure it is important to bear in mind that it consists not only of visible parts and layers, such as skin, hair, but also of all those invisible segments which are existing simultaneously all the time.

The time factor is also crucial. Each human (body) has its history in terms of past days (lives). There is a future, too.

Past, present and future interactions of the live model and other people (including artist itself) is also of highest importance for artistic observation.

Artists observes all those aspects instantly, nothing escapes artist’s awareness.

So, artist can choose to execute a rapid drawing, a croquis, or a studious drawing, and accomplish the same result. And this is a total representation of human and human body, including artist’s comprehension and admiration.

Some outside effects, like the alteration of the condition of light and shadow, or a physical distance are in the same time a part of the reflection of the inner world of both artist and artist’s model. 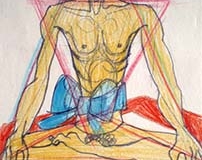 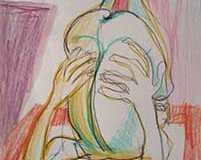 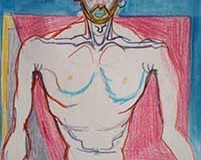 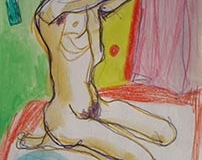 Art on this page is available for sale, ask here.

All Aspects of Figure Drawing

Both visible and invisible factors are crucial because they enable artist to enjoy playing an artistic game while creating an art work. The game is even more amazing because of the fact that the awareness about the contrast as a part of a play is also present. For an artist it is absolutely impossible to neglect any aspect or factor which is part of the equation of the comprehension of the whole of human body while performing an act of live model painting or figure drawing.