Flying Balls is an artwork from the installation art category. Its full title is ONLY THE BALL. The installation or ambiance consists of several elements: computer animation of blue balls that are moving trough space towards the visitor; then, lightning effects and real objects, or basketball balls, borrowed especially for the exhibition by the Tigar Company from Pirot, Serbia.

They were exhibited in 2001 at the “Veljkovic Pavilion”, the exhibiting space of the Center for Cultural Decontamination from Belgrade, Serbia.

The exhibiting space is huge; it is actually an artistic space intended to presenting various forms of art, like drama plays etc. It consists of a stage and a place for the audience with the theater seats which can be dislocated and the space can be transformed into the regular visual art exhibiting space.

The art audience had entered the dark room, and could opt to quietly sit and watch the computer animation and the scene enfolding in front of their eyes. 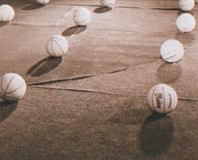 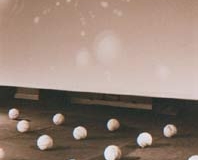 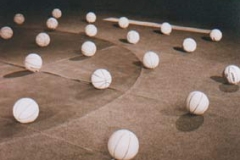 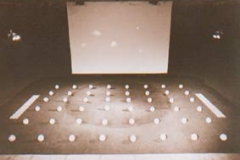 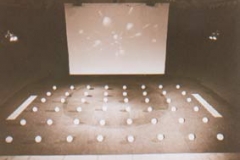 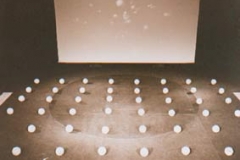 The animation was presented on the huge front central screen; the blue balls were flying to the observers’ direction. The impression was like they were moving trough the air or empty space like some sort of hologram. Another type of balls, real ones, not a hologram, was placed in an orthogonal order on the floor. I have already mentioned that they were orange balls for basketball. Orange is a complementary color of blue.

At the first part of the exhibition, orange balls remained at their place. But in the second part, audience was allowed to move them. So, the audience became a legitimate part of my artwork and its co-creator.

Art is a wonderful playground and I am happy when I can offer an opportunity for an artistic audience and art lovers to play, too.

Obviously, the concept of this art work is beyond the linear concept of reality.

There is a long duration video captured about the exhibition. The computer animation, objects, lightning effects and the audience evolved in a new autonomous video art work which grew from the events associated with the seeds of the idea of flying balls.